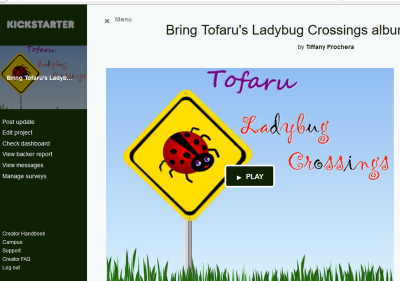 I hope you’re having a great week so far!

As you have may have seen in the last couple of posts, I have launched a Kickstarter campaign to raise money for manufacturing a limited quantity of Ladybug Crossings CDs to start things off.

It’s my first such campaign, it has been an interesting experience so far and I’ve realized, in talking with people, that not every is aware of how crowdfunding works or where to go to participate in it so I thought I would share some insights with you this week.

Some of this info you may already be familiar with, some perhaps not so here we go!

Kickstarter and other sites like it such as Indiegogo and Gofundme are what are known as a “crowdfunding” sites. A crowdfunding site is a place where can have everyday people donate directly to your cause or project . This is a much different process from applying for government grants where your project is judged by a panel and you submit proposals at certain times of the year and you may have to wait a long time to get approved, depending on what you are engaging in, and if you do get approved there are certain rules you need to follow . I was speaking with a writer who applied for a grant to write a novel and, yes, he received the funds and, according to the agreement, he was not permitted to actually start writing the novel for almost a year. With crowdfunding, you can create a campaign today and start receiving donations tomorrow. It’s just different ways of going about things with their own pros and cons, as you will see.

Different sites will have different foci depending on who their target demographic is. Kickstarter and Indiegogo, for example, are specifically designed to support creative projects so you wouldn’t start a campaign there if you were raising money for a family in crisis, for example. That’s more of a Gofundme kind of thing.

But if you were wanting to raise money to record an album or produce a film, these sites could definitely be an option.

Then you set up a page on the site with details about yourself and the project. Potential funders need to know your past experience, what you are looking to achieve, etc. If you make a film, who is involved in the production? Have you produced a film before? What are you going to do with it once it is completed? The site recommends that you use a video to really help make a connection with your audience.

Once you have your details about you and project worked out, you need to put in some potential rewards – kind of like PBS! If someone donates $40, they might get a copy of the CD, for example. If they donate $100, you might want to give them a shout out in the liner notes as well. There are lots of options and it’s a great chance to be creative. I saw a musicians campaign where for a donation of x amount, she’d get together with you and play video games or something like that. And funders aren’t obliged to take the rewards and can always choose to donate just because. Awe!

But here are a couple of things to remember about this system.

It doesn’t cost anything to launch a campaign but the organization that runs the site does take a small percentage of the money raised and they may charge you for credit card transactions etc.. It is a business after all! So, it’s important to take that into account when setting your goal amount. If you actually need $10,000 to complete your project, you might want to add another $1000 to cover fees.

Remember that you are trying to raise money for your project! If the cost of fulfilling on your reward exceeds the cost of the donation, you’re kind of missing the point of the whole thing.

On Kickstarter you need to indicate the scope of the reward – can you deliver on it international, locally etc.? I came across a campaign for someone trying to raise money for an album and, for a donation of $2500, they would put on a house concert. On the surface that might sound reasonable but, according to the specs on the rewards, he was willing to put on the concert anywhere in the world! So, if someone from Europe supported him with such a donation he would be committed to traveling there to perform. You add up your flight, hotel etc. and there goes your $2500!

So make your rewards reasonable to ensure that you still get something out of it.

Once you officially launch your project you need to gather all your resources and get the word out. Facebook, Twitter, ask family and friends. All of that. As you continue to work on your project – the planning etc. – you can post updates so your funders know that something is happening and you can get them emotionally invested in what you are doing.

There are companies who will, within minutes of launching your campaign, contact you offering their services, telling you that they have x number of thousands of Twitter followers and, for a fee, they will send out the details of your campaign to them.

I have not used these services as yet and I advise you to be wary of them. There may be legitimate people with legitimate contacts but you don’t always know where those tweets are going. If you can find a group that has real human followers that actively invest in creative endeavours it might be worth looking into but do your research first.

Here’s the catch with these crowdfunding systems.

If you raise enough money, you’re golden. Once the campaign is over according to the date you specified, and you have reached or exceeded your goal, the money is taken from the funders – usually through credit cards – and deposited into your account and you then go through the process of a) finishing your project and b) fulfilling on your rewards obligations. The rewards can obviously take some time because the album has to be recorded before you can send it out to anyone!

However, if you don’t reach your fundraising goal, no money is transferred and you are back at square one. That is, obviously, the potential problem.

But even if you don’t ultimately raise the money, is it still an opportunity to connect with people and get the word out there. That’s why I did it. It was another avenue to reach out to people.

So, if you haven’t already tried it, explore a little, check out the sites. You might just find it’s a new way to make things happen!