Today I want to talk about the power of art and how it can reach way beyond the work itself. More specifically, I’d like to touch on the power of fandom.

Now, as artists we all love and appreciate our fans. When someone enjoys our work and supports our endeavours, it can really help us keep on creating when times get tough and we feel discouraged for some reason. But did you ever think that a piece of art, specifically a hit Broadway musical, could impact a country’s financial system? Crazy, isn’t it? But it may well be happening as we speak!

The musical I’m talking about is, of course, the über-brilliant Hamilton, the hip-hop infused telling of the story of the American political figure, Alexander Hamilton, created by the genius, and recently Pulitzer Prize-crowned, Lin-Manuel Miranda. If you haven’t heard of Hamilton, I must say I’m surprised at the strength of the internet connection underneath your rock that’s allowing you to read this blog post right now. Just kidding – but not. 🙂 This show is taking the world by storm. Tickets are essentially impossible to get, it received a record-breaking 16 Tony nominations, and Miranda, who also stars as Hamilton, has thousands of people liking his tweets within minutes of posting. There are even those who literally will not go to sleep until he has shared his daily “G’night” tweets!

So, this is the first part of the equation –the crazy popular show. Now, to the financial bit.

In the States right now, for those of you who aren’t from the US or privy to their news – I’m from Canada but, being neighbors, we’re pretty much aware of all American goings on – there has been great discussion of what figures appear on the US currency. There is a fabulous campaign to finally have a woman represented on the bills and it appears that the abolitionist, Harriet Tubman, is the winner. A woman highly deserving of the honour, to be sure!

But what bill should Tubman be on and who, then, would be kicked off? The plot thickens. Many have been suggesting she should be on the $20, an honour currently held by Andrew Jackson, a slave owner. That would be quite the touché! The US Treasury Secretary, Jacob Lew, had proposed the $10 bill but seems to have changed his mind. Can you guess why? Who do you think is on the $10 bill now? None other than America’s founding father without a father, Alexander Hamilton! So, the sneaking suspicion is that the response from Hamilton fans has prompted the change of heart! Pretty cool, eh?

As we know, art can be incredibly influential but this it certainly kicking it up a notch. How would it feel to have fans who are that devoted to your work, to be able to have that kind of influence and really make a difference beyond the art itself? I certainly strive to inspire people – that’s totally my m.o. – and knowing that I have affected someone’s life in even a small way is such a blessing. I couldn’t imagine starting an outright movement!

If you did desired such a thing -and I’m not saying you do necessarily – but if you desired that kind of impact even on a smaller scale, what would it take?

Well, it takes 1) a work that is undeniably great. It takes honing your craft so that you can create something that connects with audiences on a number of levels. Seriously, I don’t think I have been affected emotionally by a work of art as much as I have with Hamilton – and I’ve only been listening to the soundtrack!

And 2) you need to communicate with your people! You can have an absolute masterpiece on your hands but if nobody knows about it it’s just a bunch of boxes of stuff sitting in your apartment. Seriously, I’ve totally been there! Miranda, is so engaged online – so supportive and encouraging of fans and other artists and always sharing fun behind-the-scenes stuff. Now, I don’t know what came first, the chicken or the egg. You might be thinking, well, he’s a big deal (he also wrote and starred in the incredibly successful In The Heights). Of course, people would care about what he has to say . But maybe that’s what he’s always done. Maybe that’s how people started to become aware of his shows in the first place – through his reaching out and connecting with those who might appreciate what he has to offer.

So, I would invite you to keep working on your projects until they are the best you can make them. No, they’re probably not going to be perfect but keep learning and striving to make things that you’re really, really proud of, things you will be excited to release out into the world. And try interacting with your fans, and future fans, like you’re already a big deal. Let them know you’re there. Create fun things to share. Don’t just shove your CD or your book in their faces all day, every day. Give them something of added value – maybe a fun video series, behind-the-scenes shots – stuff that will keep them coming back for more. And they will!

That’s how you get your work out into the world so you can really make a difference. And if you haven’t heard Hamilton yet or seen the show, get on it already! It’s so full of infectious earworms it will keep you up at night and it made my momma cry but that’s a small price to pay to witness awesomeness!

Okay, onto some Swimming Tigress news!

Ladybug Crossings, my album for kids under the name Tofaru, is up on iTunes, Amazon, CD Baby and all your favourite digital services. It will get the whole family singing along so get your copy today!

Recently, I’ve provided the voices for a couple of video games and an episode of an animated series, which was a hoot! When they’re actually available, I’ll tell you more.

I wanted to do something to inspire positivity online so I started the Twitter hashtag #MyGoodNews so people can share the good things going on in their lives. I thought it would be fun. Join me, won’t you? Get on Twitter, use the hashtag and share your good news!

In addition to “Tabitha’s Magical Voice”, “Mocha And The Moon”, and A Candle At Both Ends, I’m going to be placing my catalog of sheet music onto Amazon in Kindle form and in the original paperback. I’m in process right now but I’ll let you know when it’s done. In the meantime, you can still get the music in paperback and PDF format from the Swimming Tigress Shopify Store. You can visit the store here! And of course, check out “Tabitha”, “Mocha”, and Candle while you’re at it! As you may know, I’m rather new to the Amazon e-book thing so if you see something amiss, be a peach and give me a heads up, will you?

Okay, that’s all for today folks! Make it a great one! 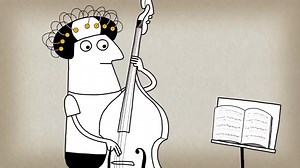 Hey!
So, a while back in the first episode of Muse TV I talked about some of the benefits of music education – one of them being how it unites the left and right sides of the brain.
Well, there’s more to the story!