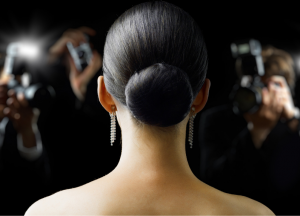 So, I was in New York City last week – my first time in the Big Apple – and I had a blast! Caught up with old friends, saw some shows, went to museums, had high tea at the Plaza. The whole nine yards.  It was thrilling to witness “the best of every industry”, as my friend put it, that was represented in this mythical city. Seriously – since I’ve been back, it seems that every TV show and movie takes place in New York.

But that’s not my point. My point is, while watching these truly talented performs strut their stuff on the Broadway stage, I couldn’t help but wonder, would I want to be doing that?

You see, many of us are programmed to crave the spotlight. We are taught that those we see most often – the Beyoncés, the Bradley Coopers, even the J.K. Rowlings (as famous as a writer can get) – are the most important people in our society and their status is the only measure of significance and success. We are told that if we desire anything in this life, it should be to be the focus of attention in the biggest arena possible.

Now, I’m not saying it’s necessarily a bad thing to go for fame or to want to be the front man. Some people are sincerely meant to be in that position and they inspire the world with who they are.

There are times, however, when the thirst for fame can be misguided – not because we may not be talented enough but because, if we really think about it, it’s not what we actually want.  When we’re striving for anything, it behooves us to actually look into what is involved in living that life. For example, being a prima ballerina seems like a beautiful vision – and they do look lovely and strong – but if that’s what you want to be, be prepared for really sore feet, Like bleeding and blistered more often than not.

The shows that we saw on Broadway involved an incredible amount of physical activity ; not just two people sitting in chairs chatting away.  And one of them, Harry Potter and the Cursed Child – completely brilliant, by the way – was constructed in two parts of three hours each. That’s literally six hours a day of running around and throwing suitcases and all sorts of crazy things!  Would you be up for that? Would you be willing to move to a metropolis like New York if it meant being at the top of your field? It’s a big switch if you’re used to living in a small town. What about having to be “on” when you’re not feeling well? I remember watching a live broadcast from the Metropolitan Opera and, while the cast sounded glorious as always, there was so much sniffling and snorting backstage because most of them were sick.

There are often ways to adjust things to better suit our inclinations. For example, you can love singing but not love performing live so you could potentially consider becoming a studio musician. Or you can do community theatre as a hobby rather than going for a full-time career as an actor and all that comes with it. Even so, however, we can still look at where our real talents and inclinations lie instead of towing the party line of fame and fortune. Well, I say that but, in many cases, it’s the ones who don’t have the fame who are actually making most of the money so I’m not really sure why they put those two words together so often. But that’s another topic of discussion.

When I was in university, I went to see a counsellor on a regular basis. Hey, we all need someone to talk to at certain points in our lives.  Anyway, there was a session when I when I expressed my confusion that I would be watching these people on stage and be totally captivated them but, at the same time, wasn’t sure if that was what I should, or wanted to, be doing. I knew could sing but was insecure about my voice at times, I wasn’t sure how I felt about travelling from place to place without fully experiencing it, being isolated, and I was adaptable to a certain extent but didn’t really like being up too late most of the time. I’m usually in bed at 10:00 most nights unless there’s a special event or something.  So what was it that made me want to be these “rock stars”, for lack of a better word?

And then my counsellor suggested something I’d never thought of before. He suggested that perhaps I was meant to be behind the scenes but I was attracted to something else about these people, like their confidence or level of skill. It wasn’t the fact that they were performing so much as they knew they were meant to be performing and they were damn good at it. And, to someone like me who was in a state of flux, that knowing would be incredibly attractive. He made me realize that I could be that assured and skilled as a songwriter or a producer or a director or whatever and have that same sense of self-possession and satisfaction as those “rock stars” seemed to have.

Because, really, I will follow whatever path is right for me and if being in the public eye comes with it, I’ll accept that with grace and humility. But I don’t care if people are screaming my name. I don’t need to be chased down the street by mobs trying to get my autograph. I’m more interested in being respected in my industry, being the one who those in the know whisper about as I stand in line at the grocery store. “Do you know who that is? She’s the one behind <insert life-altering, world-enhancing creative experience here>.”

So, if you desire being in the spotlight and entertaining the crowds and honestly love it and all, or most, of what it entails, go for it. Reach for your marquee dreams and good luck to you. But if you’re at all feeling a sense of disconnect with your creative path, I ask you to consider what your soul is really craving, look at your true gifts and talents and what skills you’re willing to acquire, and learn to be at peace with that.

You may be a good guitar player but maybe you’d be an even better recording engineer or producer or even artist manager. You may be a decent novelist but you’d really be a brilliant journalist or editor. There are so many parts to play in this creative world, so many roles to fill, and none is more or less important or valuable than another, no matter what celebrity mags try to tell you and no matter how some of those celebrities – I won’t name names – like to give the impression that they do everything themselves .

I’ll leave you with this. We love our lives the most when we are giving the best of our authentic selves to the world, whatever that looks like. So don’t be afraid of discovering what you’re really here to do. You’ll only be happier for it!

In Swimming Tigress news, I’ve just put up some new tracks for licensing on Pond 5 . So, if you need music for your media production, whether it’s a commercial, TV show, web video or podcast, check out all available tracks here  https://www.pond5.com/artist/tprochera#1 .

Here are some updates from STM/NP land!

Tiffany had the pleasure of being a guest solost at the Joie De Vivre Singers spring concert on April 28th. The audience was wonderful and she thoroughly enjoyed singing a couple of Ukranian folk songs arranged by W.H. Anderson as well as her very popular Magical World.

She’s also busy working on a new collection of songs for intermediate vocalists and a musical for young people, Mocha and the Moon, about a jersey cow named Mocha with some astronomically high aspirations!

We thought we’d share with you a poem of Tiffany’s that is being set to music for the song collection, the dramatic I Have Lost My Bottle of Faerie Dust. Enjoy!

I Have Lost My Bottle Of Faerie Dust

I have lost my bottle of faerie dust

All seems grey now
The memories are fading of a time when the world was sparkling
Once passions ran wild and free, my heart was alive
I can scarcely feel it beating
Once these feet were caressed by the dewy grass in the glow of morning
Like shards of glass the grass seems now
These eyes fixed on the curves of a leaf that had fallen to the ground.
The scent of jasmine would make me shiver with delight
These lips were enraptured by the sweet taste of a berry’s juice.
Now, tis so bland it is sour.
Laughter that once tickled my ears is tainted with a sinister tone
How cruel it sounds! It mocks me.
The stars don’t sing me to sleep.
The music is gone! The music is gone!
I no longer see my wings in the water’s reflection
I no longer feel their weight
I search in vain for the circles of stones and flowers where I used to play
How have I become separated from my kin, my home, where all was joy, all was love
Where springtime was eternal?
Oh where, where is my bottle of faerie dust?
Before all the memories disappear.
Before all colour and light is extinguished.
I must know that magic again

In NP news, we’ve put up Part 4 of Tabitha’s Magical Voice on our new Notalotabull Press Storytime Blog. When the Grenigots discover that Tabitha’s voice can save them from the dreaded nados, they want to hold her captive forever. How is she going to get home?  Download your copy of the ebook at www.tiffanyprochera.com.

Tiffany as also submitted a poem to the CBC Canada Writes Poetry Contest this week so keep your fingers crossed! We would totally post the poem for you all to read but the rules say we can’t, so…

Well, that’s all for now! Have a great day and keep posted for more!

You’ll never be happier to be in a bad mood. Swimming Tigress Music is pleased to announce the arrival of….

Bad Moods and Seven Other Super Reasons to Sing A Silly Song! 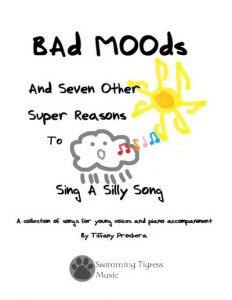 Bad Moods is Tiffany Prochera’s first collection of songs for young singers.  These eight little ditties are sure to be fun for teachers and students alike.  While the hard copies are still at the printers, the digital download is available as of today!
Visit the Bad Moods page on the Swimming Tigress Music website to learn more about the book, listen to audio clips of the songs, view samples of the score. Then you can download your very own copy right away!